Don’t Be Late in the Morning 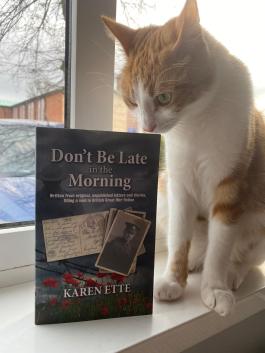 David Adcock, grows up in the Leicestershire village of Syston. Popular and respected by his friends, they later become his pals on The Western Front where, as a ‘fighting Leicester Tiger’, he experiences one of the most catastrophic and overlooked battles of the First World War.

His childhood sweetheart, Emily Jane Wade, is the only girl in a family of five children who is sent to live with a cruel aunt and uncle after her mother’s death. After the outbreak of war her role in society changes and scandal shrouds her relationship with David.

Don’t Be Late in the Morning is written from original, unpublished letters and diaries, filling a lacuna in British Great War fiction.

A couple of five-star reviews:

5.0 out of 5 stars     Excellent Research Wrapped up in a Very Good Novel

I found this book to be one of those where you cannot wait to get back to reading the next chapter! The research, based on original diaries and letters, weaves a poignant story about two families and the impact of the Great War. I was fully engaged with the personalities and really wanted to know how they survived. Everyday life in an English village with everyone knowing everyone else and the pressure on young, able men to sign up to the armed services is well described. Karen Ette is to be congratulated on an excellent book with an eye to detail, where you can be forgiven for forgetting that it is a novel.
5.0 out of 5 stars      It was so so good

I have read hundreds of books mostly to do with ww1. This book is so well researched and the author really knows her subject. The attention to detail is wonderful and for anyone who lives in the area it must be stunning to read it as social history. When I reached the end of the book I found I had tears in my eyes Thank you Karen Ette for a really great book.

Copies can be bought from Amazon , the publisher or from here by email request.

A Second Christmas Truce?: Christmas on the Western Front, 1915

The well-known Christmas Truce of 1914 is often considered a unique anomaly within the violence of The Great War. However, Christmas 1914 was not the only documented suspension of hostilities during the First World War and another cessation followed in December 1915, but is far less known. Is this second Truce fact, or fabrication?

The glossy Advent Calendar Recipe Book has a daily recipe with colour photographs, the nativity story, fun-facts about Christmas and reflections for Advent. This up-dated version has some new, colour photographs and extra recipes taking readers from ‘Stir-up Sunday’ through to Epiphany.

This affordable step-by-step guide will show prospective undergraduates how to easily complete their application to UK universities through UCAS. From starting with your name through to replying to offers from universities, it is straightforward and easy to use. It also includes a comprehensive section on how to write the perfect personal statement. Published 2018.

Each month has a beautiful photograph and seasonal poem creating an everlasting diary for remembering special dates like birthdays, anniversaries, pets’ inoculations, etc. plus a space for monthly notes. A superb gift.

You can see more at: Dr Karen Ette, Carbonmade

The first is written from work and research done for my PhD, which I have continued adding a few other related topics too. The site is: WW1-Battlefields-and-Beyond.

The second covers a number of subjects from book reviews to recipes, with the odd saint’s day and reflective post thrown in. It’s called Fancy Pans Cafe as that’s where it all happens.

Writing with Rulers Wit, a number of my short stories appear in their seasonal anthologies.